Abomama actress, Nokuthula Mavuso (formerly Ledwaba), has opened up about quitting her family church Apostolic Faith Mission (AFM), expressing her exasperation about the way women were sometimes treated at church.

Taking to Twitter, Nokuthula Mavuso wrote that she quit the AFM after teenage girls in the church were sent home for wearing short skirts.

“Konje I quit the family church AFM after an elder sent a whole lot of teenage girls home for wearing short skirts. “Ba di gcebhezana ga ba boele morao.”Why? Ra disturb-a. The men had complained. Anything above the knee was unacceptable.
Mom tried but I wasn’t having it.(sic),” – she tweeted

The actress went on to say the only time a woman spoke from the pulpit was on Mother’s Day.

“I had issues there nje. The only time a woman would be on the pulpit was on Mother’s Day. Women were mainly supporters of the ministry. I was raised by a woman who drummed equality into my head. ‘Does God not appreciate women preaching the word?’ I had questions.” – she said 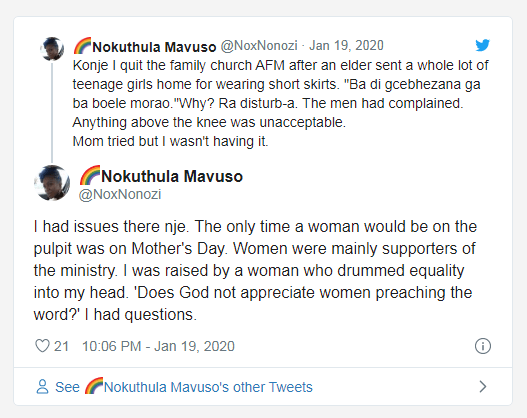 However, Nokuthula Mavuso said she enjoyed Sunday school and her voice came from an inspiring Sunday School teacher.

“I enjoyed Sunday School though. Brother Hendrick made it fun and he encouraged me to sing. He signed me up to “render an item” when I was about 8. I held a mic for the first time. I heard my voice. I liked it (sic).” – she tweeted

Builders seeks to bring out the builder inside all of us