Exchange Rate Pound to Rand helps you convert British Pound to South African Rand from any amount. There are many FREE online tools that you can use to check the exchange rate pound to rand. In this article, you will learn more about the Pound vs Rand and how to convert GBP to Rand.

What is Exchange Rate Pound to Rand?

When you check the pound rand exchange, you must always know that an exchange rate is the value of a country’s currency (United Kingdom) vs. that of another country (South Africa) or economic zone.

In the below section, you will learn about the relationship between the United Kingdom (UK) and South Africa (RSA).

According to dirco.gov.za, over 50% of total South African exports to the United Kingdom are either precious metals or “unclassified goods”. The United Kingdom remains South Africa’s most important export market not only for fruit, vegetables and other agricultural products but also for manufactured, value added exports such as clothing, automotive equipment, wine, furniture and a host of other products.

History of the British Pound

According to corporatefinanceinstitute.com, the name of the pound sterling is derived from the Latin word “libra,” which corresponds to balance and weight. The Bank of England first issued the pound banknotes more than 300 years ago, with the notes undergoing several changes over the years. The pound coin first appeared in 1489, during the rule of Henry VII. Pound notes started to circulate in England in 1694, shortly after the establishment of the Bank of England, and the notes were originally handwritten. The pound worked in its complex scheme of pennies and shillings until 1971, when the decimal system was introduced.

The South African Rand was introduced on February 14, 1961, replacing Round Sterling as legal tender, at two Rand = 1 Pound 10 shillings. 1961 was also the year the country became a republic and left the Commonwealth of Nations following a whites-only referendum.

The pound (symbol £) was the currency of the Union of South Africa from the creation of the country as a British Dominion in 1910. It was replaced by the rand in 1961, the same year that South Africa became a republic.

In 1825, an imperial order-in-council made sterling coinage legal tender in all the British colonies. At that time, the only British colony in Southern Africa was the Cape of Good Hope Colony. As time went on, the British pound sterling and its associated subsidiary coinage became the currency of every British territory in Southern Africa. The pound at that time was subdivided into 20 shillings, each of 12 pence.

For example, if the rand-pound exchange rate is R19, it means that to buy one British pound, you would have to pay R19.

It’s important to know how much the pound will cost you – especially if you are going to travel to these countries. It will help you plan how much you will spend during your time abroad.

This helps us know how much is 1 Pound to ZAR.

Who or what determines the rand pound exchange rate

The exchange rate of the rand is determined by “market forces”, according to the Reserve Bank.

The buying and selling rates for pounds, are based on the supply of and demand for pounds in the market at any given time. 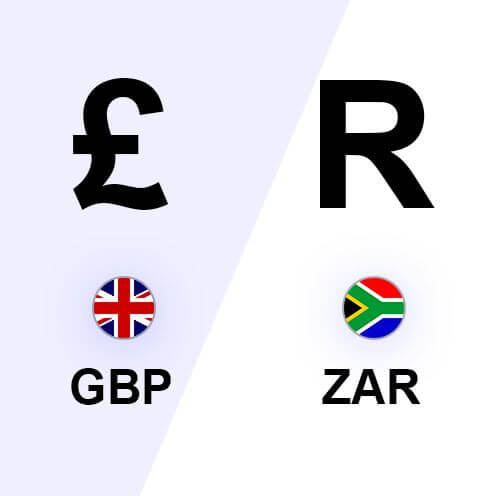 Sometimes, the Reserve Bank may “intervene” in the market to purchase and sell pounds – if it is in line with monetary and exchange rate policy. The bank’s intervention would be to “smooth out unduly large short-term fluctuations” in money-market liquidity and the exchange rate.

For South Africa, rand weakness means higher prices for a number of goods in the shops that are imported – including electronic equipment and some wheat products.

How to Calculate Exchange Rate Pound to Rand

If you are planning to travel to the UK, you will need to change your ZAR to GBP. While you can make your purchases with your debit or credit card, you risk to waste too much money on foreign fees. However, the best way to avoid this is to exchange currency and carry cash around. Below are some of the cheapest ways to buy foreign currency.