30-year-old teacher, Innocentia Sibi, said goodbye to Mzansi on Sunday at the Idol SA live show. She was eliminated leaving nine other contestants in the run for the number one spot on Idols South Africa.

Speaking to DailySun, Innocentia Sibi said: “I’m so grateful for the experience. It’s not every day that a person with my condition [albinism] can go that far in such a competition.”

The Top 9 contestants were a mixed bag of soulful Afrosoul ballads, dance hits and chilled love tunes, which gave them a chance to shake off last week’s emotional outpouring of grief and get the audiences dancing.

This week’s guest performer was DJ Tira, who was asked which 10 songs he would want to listen to if he were stranded on a deserted island. This song list was the theme for tonight’s performances, with the contestants mentored by the hitmaker himself.

Performing first – a sure sign that she was safe – was Virginia Qwabe, who impressed Somizi Mhlongo so much with her performance of Durban’s Finest hit, Umsindo, that he called her Brenda Fassie reincarnated. Randall Abrahams was equally impressed, though Unathi Nkayi felt like she seemed distracted.

Also safe from elimination was Sneziey Msomi, who performed Dladla Mshunqisi’s Pakisha to wild cheers from the audience. The judges agreed with the audience, with Nkayi saying the music industry was just waiting to work with her, while Mhlongo praised her in tongues and adding a “whoo shem” for good measure. Abrahams said her rehearsal was enough to impress him and her performance showed it was clear she was true performer.

Dinky was third, performing No Rush by DJ Tira and Prince Bulo. Mhlongo enjoyed what he called a chilled performance. Abrahams said that while she was a good performer and gave an equally good performance, she would have to try harder to beat the likes of Msomi. Nkayi congratulated her for a great performance.

Micayla Oelofse’s rendition of Daniel Caesar’s Best Part, had some mixed reviews from the judges. While they were generally happy with her performance, with Abrahams saying she had chosen her song wisely, Nkayi felt she could have practised more restraint. Mhlongo said her voice was innocent and authentic but needed to be a bit more controlled.

Nqobile Gumede continued to amaze the judges with her resilience. She performed Malokazi by Mduduzi and the judges praising her for a performance that did justice to the spirit of the song. Nkayi said it was a sweet, strong performance that was simple and to the point, while Mhlongo said she did an amazing job. Abrahams said she would get votes for doing just what the song deserved – a simple performance without adding drama.

Next up was Nolo Seodisha with AKA’s Jika. Mhlongo said it was a super amazing song that got him excited – especially since he is getting married very soon. Abrahams said Seodisha had a feel-good element about him, while Nkayi said he had lived the song as he had reminded people that this was wedding season – a time to be happy.

Mangaliso Gumbi’s soulful performance of Chrisette Michele’s A Couple of Forevers had Abrahams wondering how the audience would vote, but adding he was hoping Gumbi would be back next week. Mhlongo said like Seodisha, Gumbi had given him wedding fever. Once again, he called her a wonder, saying she was part of the reason why he believes this season’s talent is probably the best by far of all the seasons of SA Idols. Nkayi called her versatile and said she had a long singing career ahead of her.

Viggy Qwabe cover of Distruction Boyz’s Gqom hit Amaxoki marked the first time the second half of the super-talented twins failed to excite the judges. While Nkayi felt the performance was amazing, both Abrahams and Mhlongo were less enthused, with Abrahams reminding her this was a competition.

Completing the Top 9, was Luyolo Yiba, with Sjava’s Abangani. Nkayi praised Yiba for a solid, controlled performance that was exciting. Abrahams said it was an honest performance, but he and Mhlongo asked him to be more dynamic and give audiences a different side to his usually chilled performances. 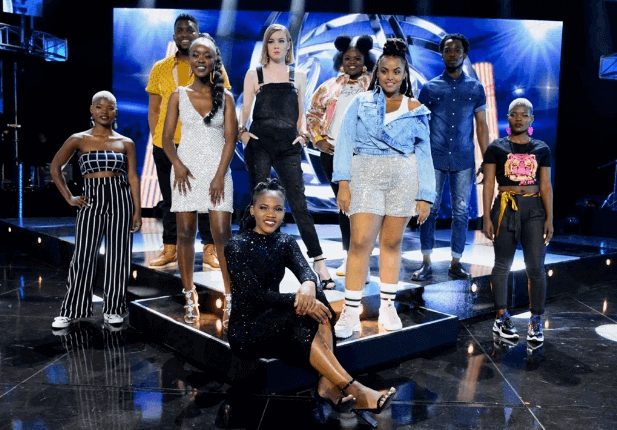 Next week, the Top 9 will perform for a spot in the Top 8.