The first three episodes of Season 5 of Lockdown, the most awarded drama at last year’s SAFTAs, are now streaming only on Showmax, with two more episodes launching every Thursday. The first episode of Season 5 will also premiere on YouTube tonight at 8pm, alongside a live chat with DStv Mzansi Viewers Choice and SAFTA nominee Zola Nombona, who plays Monde.

Notorious for its cliffhangers, plot twists and emotional rollercoasters, Lockdown takes viewers into the cells and offices of Thabazimbi Women’s Correctional Facility, where survival is the order of the day.

As Season 5 picks up, Masebata’s cult is no longer in power. Arch-rivals Mazet (Dawn Thandeka King in a SAFTA-winning role) and Tyson (Lorcia Cooper in a SAFTA-winning role) are running the prison yard together, for now. Governor Deborah Banda (Pamela Nomvete in a SAFTA-nominated role) is under pressure from The Department of Correctional Services, after one death too many at the prison. And Monde (Zola Nombona in a SAFTA-nominated role) is trying to make things right with Vicky (Lauren Jenae). Multi-award winners Linda Sebezo, Nomsa Buthelezi, Patricia Boyer and Sophie Ndaba co-star.

After an intimate cast screening at MultiChoice City last night, the key cast – looking far more glamorous than we’re accustomed to in Thabazimbi – received plaques from the production company, Black Brain Pictures, celebrating their role in making Lockdown the first Mzansi Magic drama series to reach Season 5. Linda, so tough as Maki in Lockdown, shed a tear when she received her plaque, while Lorcia spoke for the cast when she thanked fans, saying, “We are nothing without our audiences.”

Dawn echoed this, saying, “I look back at the first day we did this and I can’t believe we made it this far. It’s been rough – in our personal lives and on screen. But look at us now! The devil did not win. Lorcia is right: we are nothing without the support. Don’t ever think we take it for granted.”

In the build-up to last night’s screening, Lockdown has been hailed as “one of the best productions that has come out of this county” by Azania Mosaka on 702, and “one of South Africa’s most riveting local productions” by Actor Spaces, with YoMzansi praising “one of the most impressive casts on South African television.” 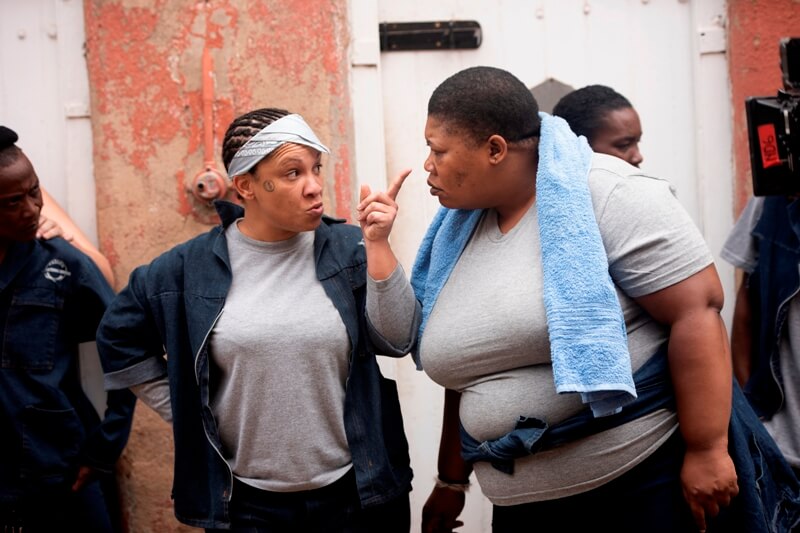 Early reviews suggest Season 5 could be the best yet for the show, which won five SAFTAs last year, including Best Drama.

With SAFTA winner Mandla N still directing every episode and SAFTA winner Gaopie Kabe returning as the DOP, Mgosi called it “one helluva season that you don’t want to miss; “ TVMzansi wrote, “Definitely worth the wait… Beautifully shot… You’ll love the elements of comedy and the music is so on point;” and Zalebs hailed it as “thrilling… Set to leave viewers sitting on the edge of their seats and begging for more”.

Or as TshisaLive tweeted after the cast screening: “It’s A LOT. We were never ready.”

If you’re not already addicted to South Africa’s favourite prison drama, catch up on the first four episodes of Lockdown S1 on YouTube, and the previous four seasons on Showmax here.

Watch the trailer below: