First look at Sophie Lichaba in Lockdown Season 5. Lockdown, the most-awarded drama series at last year’s SAFTAs, has just released its Season 5 trailer. The hit prison drama has moved from Mzansi Magic and is coming only to Showmax from 30 January 2020, with two episodes per week every Thursday.

Notorious for its cliffhangers, plot twists and emotional rollercoasters, Lockdown takes viewers into the daily battle for survival in the cells and offices of Thabazimbi Women’s Correctional Facility.

As Season 5 picks up, Masebata’s cult is no longer in power. Arch-rivals Mazet (Dawn Thandeka King in a SAFTA-winning role) and Tyson (Lorcia Cooper in a SAFTA-winning role) are running the prison yard together, for now. Governor Deborah Banda (Pamela Nomvete in a SAFTA-nominated role) is under pressure from the Department of Correctional Services, after one death too many at the prison. And Monde (Zola Nombona in a SAFTA-nominated role) is trying to make things right with Vicky (Lauren Jenae).

The action-packed two-minute trailer gives fans their first look at this season’s new star, Sophie Lichaba, aka Sophie Ndaba, who became a household name in South Africa during her two-decade-long starring role as the feisty receptionist Queen Moroka in the SABC1 soapie Generations. In Lockdown, she plays Palesa, the head nurse at Kgotsong Asylum, a key location this season, where Monde’s sister, Katlego (Natasha Thahane), has been transferred.

“Palesa’s a broken woman who’s been through it all,” says Sophie. “She’s so broken she will do anything to feel better, even if it’s not right.”

Sophie joins one of the most impressive casts on South African television, which also includes SAFTA winners Nomsa Buthelezi and Linda Sebezo as fan favourites Slenda and Maki, and the multi-award-winning Patricia Boyer as Sue. 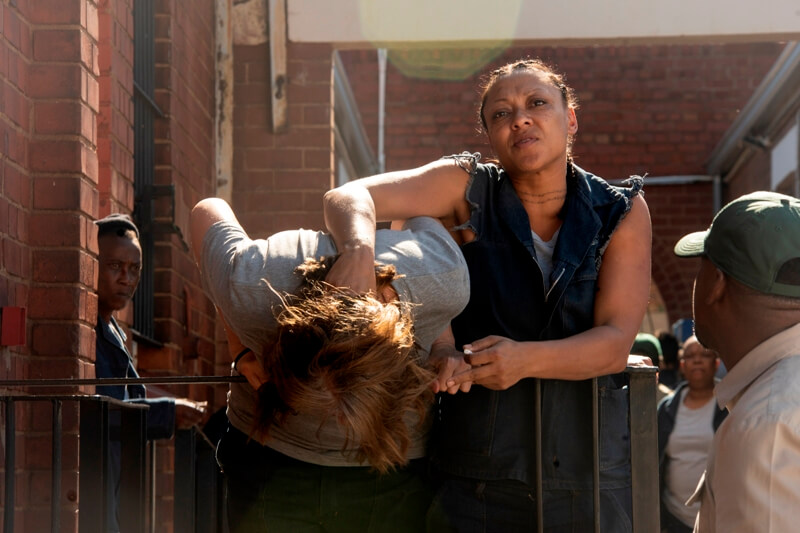 “It’s an all-female power cast,” says Lauren. “You see these magnificent women who are so beautiful in real life, and then they come into prison in Lockdown, and they are grungy and nasty. It’s so nice to be part of a cast like this, where beauty is nothing – it’s all about how dirty you can get and how true to your character.”

“The other show I do, I’m glam and beautiful, with the hair, the heels and all of that,” says Nomsa. “Then on Lockdown, I come with short hair and nothing and I look like a boy. But when you’re a storyteller, you forget about yourself.”

Both Zola and Lorcia say Lockdown helped them escape being typecast. “At the beginning of my career, I was starting to be typecast as the bimbo with the hair and boobs and short skirts,” Zola remembers. “I was tired of that, so when this came along, I was like, ‘Thank you, Lord; you’ve answered my prayers; I’ve always wanted to play a character as bare as I can be, without my beauty being enhanced.”

Similarly, Lorcia says, “Before getting Tyson, I was always typecast. I think people always saw the pretty coloured girl with the good body and straight hair… to a point where I used to go to auditions and people would say, ‘You don’t look coloured enough.’”

Lockdown creator Mandla N, who still directs every episode, started his career as an actor on shows like City Ses’la and Ses’Top La before moving into directing. That experience helped turn him into “a cast whisperer,” to quote Zola.

“Authenticity is everything,” he says. “Prison is a gritty, dirty, grungy world and we can‘t glamourise that. So when you see the ladies in prison in Lockdown, you think: ‘This person could give me a run for my money.’”

That authenticity is helped by his decision to film the series at Constitution Hill, the historic prison complex where the likes of Nelson Mandela, Mahatma Gandhi and Albertina Sisulu served time.

As Lauren says, “As soon as you get here, you feel the history and the stories that have come out of this prison. It really changes your mindset as soon as you walk in here.”

Mandla’s also surrounded his cast with background artists who are largely former inmates. As Zola says, “We ask them, ‘Does this really happen?’ It’s a big bonus as an actor being able to have that direct reference next to you.“

This season, Dawn says fans can look forward to more action than ever. “I’m excited about the audience seeing the stunts that we are going to be doing this season,” she says. “There’s a heist, we blow up stuff, I was in a van that was burning, and there’s a lot of shooting. I shoot a real gun this season. It’s been exciting; I’ve never done these kinds of stunts before.”

Showmax will release two episodes every Thursday, from 30 January 2020. If you’re not already addicted to South Africa’s favourite prison drama, you can catch up on the first four episodes of Lockdown S1 on YouTube from Thursday, 16 January 2020, and the previous four seasons on Showmax.