A publication at the heart of African culture, it’s only fitting that Moziak Magazine launch their new “Livestyle” covers with a collaboration with one of South Africa’s most sought after graphic designers and illustrators, David Tshabalala aka Slaying Goliath, who has captured the heart of local pop culture through his digital illustrations.

ALSO READ: All Hail King Forbes! A classic AKA cover for Moziak Magazine and debut of Blue’s Corner

Whether it is an illustration of the cat taxi driver after the story trended on twitter, Caster Semenya after winning her race or Trevor Noah being nominated for a Grammy, real time celebration and conversations is what Slaying Goliath’s work represents.

“As the year winds down, it was important for us at Moziak Magazine to celebrate African talent. We’ve celebrated the country’s key achievements all year through the illustrations of Slaying Goliath. We decided to flip the switch and have the spotlight on the man behind the alter ego,” shares Blue Mbombo, Creative Producer at Moziak Magazine. 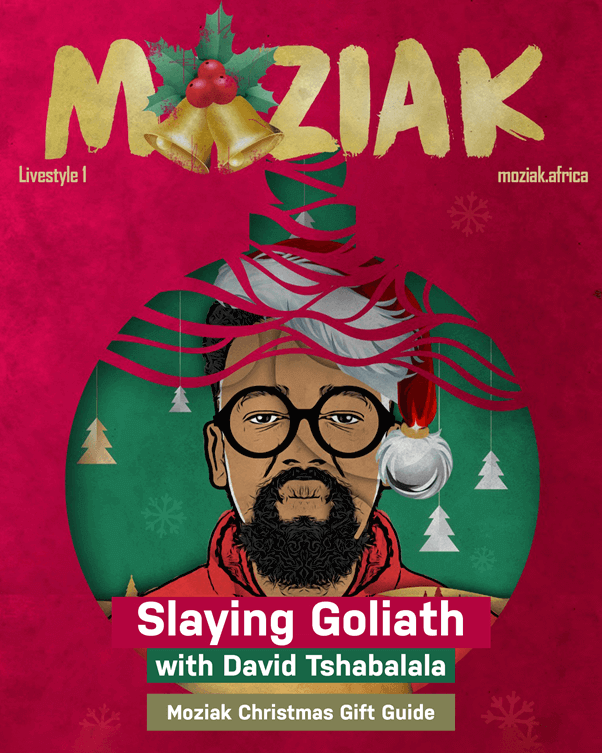 The illustrated cover by Slaying Goliath features himself in a Christmas ornament and the Moziak logo in his signature penmanship that the country has come to recognise and love.

A 2015 Mail and Guardian Top 200 alumni, Slaying Goliath continues to break the mould with his creativity which landed him two standout collaborations this year with Yogi Sip and Audi. Click link below to find out more about the man behind the illustrations.

This illustrated cover marks the first of Moziak Magazine’s “Livestyle” covers which will focus on content such as art, fashion, travel, food, décor and the likes.