Media personality and businesswoman, Relebogile Mabotja, has just received an SA Radio Award nomination for Commercial News Bulletin Reader for her contribution to The Kings Suite on Metro FM.

The prestigious SA Radio Awards celebrates the best of the best in radio annually and making a nomination as a finalist is a huge feat.

“I’m completely lost for words. This is my first SA Radio Award nomination. I’m extremely humbled to be featured amongst the best on radio in the country,” expresses Relebogile Mabotja. 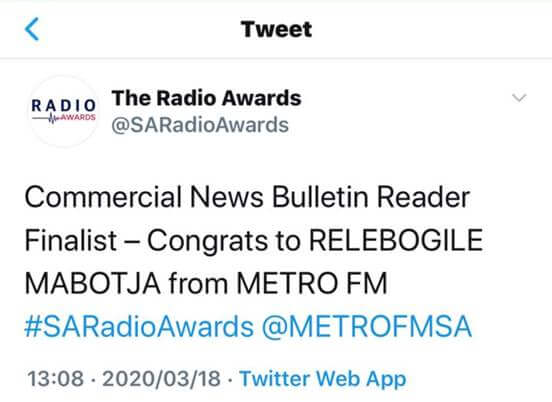 Relebogile Mabotja’s latest accolade comes off the back of being announced as the overall winner of the 6th annual Woman of Stature Awards which took place earlier this month.

A truly multi-talented media personality; Relebogile Mabotja’s radio nomination, means she has been recognised in all spheres of work that she does as she’s received awards nominations and wins for her television acting, theatre performance, TV production, music composing and philanthropy work.

Connect with Relebogile Mabotja on social media as she celebrates her latest nomination. You can also connect with her every weekday on The Kings Suite on Metro FM from 3pm – 6pm.