Watch Episode 1 Somizi and Mohale: The Union below:

A new episode of the Showmax Original four-part special drops every Monday, from the road to their wedding, to their individual bachelor parties, and then their white wedding as the finale on 16 March 2020.

While there’s been endless talk about the white wedding’s dress code of red-bottom shoes and all-white outfits, further details have remained well-kept secrets till now, as all guests had their phones locked away on arrival.

Here are five things we found out when we caught up with the couple recently: 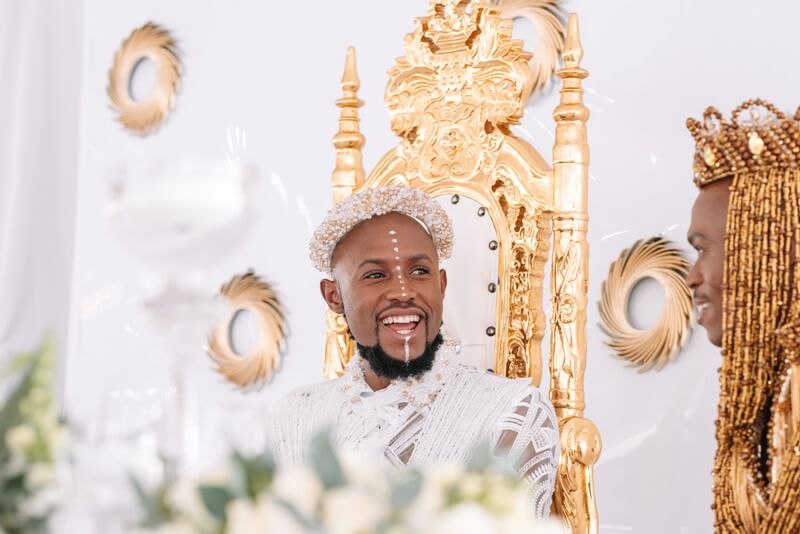 #1: Their wedding outfits were a secret

Somizi and Mohale’s main wedding outfits were created by designer to the stars Gert-Johan Coetzee, but they each had a different design consultation to keep their plans secret from each other.

“We made a deal that we were not going to do fittings together or the designs together because we wanted that element of surprise as we walked down the aisle,” says Somizi.

“I honestly didn’t know what I wanted to wear,” he adds. “I just gave it to Gert to decide because I trust him that much. He came up with the entire concept and I happened to really love it.”

#2. They designed their wedding bands together, with Nungu Diamonds

When Somizi first revealed the design of his and Mohale’s wedding bands on Instagram, social media was abuzz with fans complimenting the couple on their unique approach.

The wedding bands were specially designed by Nungu Diamonds, founded in 2013 by married couple Kealeboga and Ursula Pule.

“We were a hundred percent involved in the design of our wedding bands,” says Mohale. “My husband and I decided that we wanted a rose-gold piece with lots of diamonds, and we even chose the writing and size of the rings.”

“Their rings look like woven baskets, and that’s because the rings are made up of diamonds in two different shapes – round-cut diamonds, and baguette diamonds,” says Ursula. “Together, they help create that interwoven look, representing two different human beings that have come together.”

#3. Their parents were supportive

The grooms’ parents were all in attendance at the white wedding and left their sons with great words of encouragement and prayer before the ceremony.

“My parents came to me twenty minutes before the ceremony and we prayed together,” says Mohale. “These were the exact words from my mother: ‘God is here; the angels are here; everything is going to go well.’ For me, that really sealed the deal.”

Somizi’s mom, actress Mary Twala from this year’s Sundance winner This Is Not A Burial, It’s A Resurrection, was also with him every step of the way. But Somizi would not let us in on what his mother said, as he’d love for the rest of South Africa to find out what she had to say when the wedding special premieres on Showmax. In the meantime, below you can watch her heart-warming message to him on the way to the traditional wedding:

#4. Their vows were off the cuff

“We didn’t really pre-plan the vows for the wedding because we had said our vows while we were engaged,” says Mohale. “What we said at the white wedding were literally words that were unrehearsed and unscripted. I believe that sometimes people tend to over-plan and when the moment comes for you to execute, it doesn’t really come from the heart. So we wanted to exchange something that was really authentic rather than planned.”

#5.“I literally had the best time of my life” – Mohale

“For me, the day started off on a rocky note,” says Mohale. “In the morning we were stressed about the outfits, so I had to go sort out a few outfits for the groomsmates and myself, but from the time the wedding started, I had never had so much fun. I literally had the best time of my life.

“I always hear people say they never really enjoy their wedding but I had nothing to stress about. I was happy. I danced until the wee hours of the morning.”

Clearly, their guests had fun too…

Watch the first Somizi and Mohale: The Union episode exclusively on Showmax here:

The Queen Teasers March 2020 provided by TVSA. The Queen Mzansi is on Mzansi Magic channel 161 on Mondays to Fridays at 21h00. The below The…

Coming up on Uzalo Teasers March 2020 right here at Quick Read Magazine. Go through the below Uzalo March 2020 teasers to see how things…

Coming up on Skeem Saam Teasers March 2020. Check out the below Skeem Saam soapie teasers to see what’s gonna happen on the SABC1 much…

Coming up on Isidingo Teasers March 2020 final episodes! The final ever episodes of Isidingo after 21 (almost 22!) years on SABC3. It debuted on Tuesday,…