Paramount+ original series, Halo, based on the iconic Xbox franchise and one of the highest-grossing game franchises of all time, will be available to binge on Showmax in Africa from this Friday, 20 May 2022.

ALSO READ: Trailer for Season 2 of Troukoors (Wedding Fever) is coming to Showmax in May

With CBR hailing the series as “a compelling, gorgeous sci-fi adventure” and The Wrap proclaiming that the show “has the potential to be Paramount+’s flagship series”, Halo set a new record as the most-watched original series premiere globally on Paramount+ in its first 24 hours of release.

One of Rotten Tomatoes’ Most Anticipated Shows of 2022, Halo had been renewed by Paramount+ for a second season before the first even launched.

Emmy nominee Pablo Schreiber brings humanity’s deadliest weapon – and our greatest hope – to life as the iconic Master Chief. As The Guardian says, “Whoever decided to cast Schreiber, the character actor veteran of shows such as Orange is the New Black (as dodgy prison guard “Pornstache”) and American Gods, as an action hero deserves a medal. Standing 196cm tall and now built like a tank, he makes just the sort of imposing, statuesque figure required for a seemingly unstoppable human battle machine.”

Or as CBR.com put it, “Pablo Schreiber is the perfect Master Chief… the long-awaited video game adaptation couldn’t have found a better lead Spartan.”

The first season of Halo is executive produced by Steven Kane, alongside Steven Spielberg, Darryl Frank and Justin Falvey for Amblin Television in partnership with 343 Industries, Otto Bathurst and Toby Leslie for One Big Picture, and Kyle Killen and Scott Pennington for Chapter Eleven. Kiki Wolfkill, Frank O’Connor and Bonnie Ross serve as executive producers for 343 Industries.

The series is set in a separate timeline to the games, dramatising an epic 26th-Century conflict between humanity and an alien threat known as the Covenant.

As The Daily Beast says, “The thrilling Halo TV series will make gamers very happy… It’s a long-awaited effort that’s at once wholly faithful to—and an expansion of—its source material, retaining the look and feel of its interactive predecessor while also delivering a sprawling new story of intergalactic intrigue, warfare and prophecy… [With] top-notch CGI and a lead performance from Schreiber that lends new depths to his famously one-dimensional hero, Halo appears to have the firepower to become its own uniquely formidable sci-fi titan.” 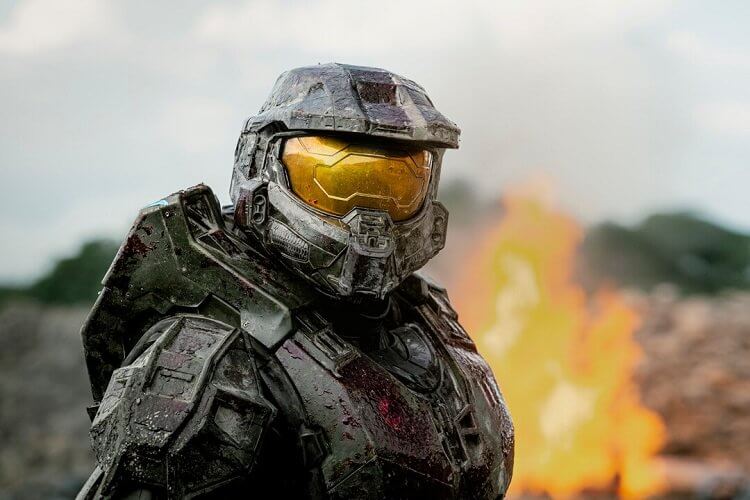 MTV Movie Award nominee Natascha McElhone (Californication) is Dr. Halsey, the brilliant, conflicted and inscrutable creator of the Spartan super soldiers, and Jen Taylor reprises her voice role from the game as Cortana, the most advanced AI in human history, and potentially the key to the survival of the human race.

Showrunner and executive producer Steven Kane (The Last Ship) agrees. Speaking at the premiere, he said that while they’ve “infused every frame of the film with everything we could from the Halo canon”, he hopes “the uninitiated will come to this as a story on its own merits, of a man trying to find his humanity.”

Halo is produced by SHOWTIME® in association with 343 Industries, along with Amblin Television, and is distributed internationally by Paramount Global Content Distribution.