When it comes to forex trading in South Africa, the country is in a somewhat weird place. But there are many successful forex traders in South Africa including Jabulani Cashflow Ngcobo who has been sentenced to six years in jail.

ALSO READ: What is forex trading and how does it work?

Self-proclaimed millionaire and author Jabulani “Cashflow” Ngcobo is again facing fraud charges after he allegedly crooked another person out of R100000. Ngcobo was acquitted on similar charges in 2017, then in 2018, was accused of scamming an Angolan national based in Sandton Johannesburg, out of money in a foreign exchange (forex) trade deal that went wrong.

As reported by SowetanLIVE last year, Francis Boole laid a charge of fraud against Ngcobo at the Sandton police station last year.

The 33-year-old South African forex trader Jabulani Cashflow Ngcobo, who is a chief executive of Cashflow Pro, last year launched his book titled “Cashflow Naked”. In his book, he shares his story and tells readers how he made it in forex and also offering financial tips for disadvantaged communities.

“They [Boole and a friend] were supposed to attend training so that they will be able to navigate the platform and deposit or withdraw [money] any time but they kept postponing … like three times. I recall that training was arranged and they didn’t pitch, so I’m surprised today that they want to blame me for their negligence.

“I think they are just bitter, acting all like victims just to dent my reputation. But there is nothing new, same old tricks,” said Cashflow Ngcobo last year.

Boole said he registered in 2017 December and was supposed to see the fruits of his labour after three months.

“I wanted to withdraw $1000 but I couldn’t. Then I realised there was something fishy. The following day I realised that I was losing money. I tried calling him but he ignored me. I also sent text messages to him in which I requested that he pays me back but he did not respond,” he said.

One of the messages seen reads: “Hello man I have been texting you [and] calling you, you are ignoring me, you put me in this stressful situation which I can’t handle right now because I’m stuck as f***.

“I trusted you with this trading account that is why I decided to invest a lot of money but you didn’t take your promise seriously now all my money is gone.

“[I] don’t know how to pay my bills for my house which is more than R60000, don’t know where else I can get this huge amount.

“Please, I’m genuinely asking you [for] my money back that [I] invested with this business because you were the one who was managing it so you must pay the consequences.”

In a statement on Tuesday, the the Financial Sector Conduct Authority (FSCA) said it welcomed the successful prosecution and sentencing of Ngcobo and Dlamini on several counts of fraud and contravening section 7(1) of the Financial Advisory and Intermediary Services (FAIS) Act.

See the FSCA statement below: 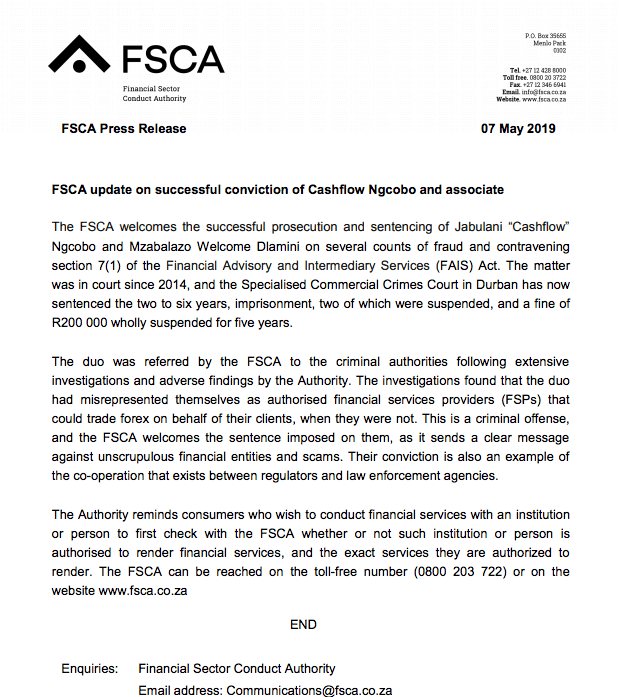 “This is a criminal offence and the FSCA welcomes the sentence imposed on them, as it sends a clear message against unscrupulous financial entities and scams,” – said part of the statement.

“Their conviction is also an example of the co-operation that exists between regulators and law enforcement agencies.” – it reads

Social media users have also shared how they were conned by Jabulani ‘Cashflow’ Ngcobo. People on social media have been criticizing South African Forex Traders and have labelled most of them as fraudsters.

I have lost money to cashflow he scammed me in front of my eyes and I met him in real. I have proof to prove everything. That guy stole my money

@CashflowNgcobo I will also be opening a case against you. He stole R30K of my investments. I have facts. I hope you rot in jail and your assets be sold to repay our monies. @cant_tashme @SAPoliceService https://t.co/kRW2oRlq8F