Who is Thando Thabethe

Thando Thabethe is a typical Gemini with a fluid, multifaceted personality. Equally gifted on screen and behind the microphone, Thabethe utilises her powerful husky voice on 947 radio where she is a deejay. Previously Thando Thabethe was on the airwaves with 5FM. If you have heard her on air, you will understand why Thando Thabethe’s sultry voice is a central feature in her current television show, Housekeepers Mzansi, which she narrates. Still going strong after three riveting seasons, Housekeepers is the story of a policewoman who goes undercover to investigate crimes committed against her loved ones. Using her jaw dropping beauty and police training, Thabethe’s character, Linda, posing as an unassuming house maid, stops at nothing to get to the truth. In the current season, Thando Thabethe as Linda, keeps viewers on the edge as she puts her life in danger to free her brother Mtho (real name Paballo Koza) who has been framed for murder.

Apart from carrying the police badge on Housekeepers, Thando Thabethe has also played a cop alongside industry heavyweights Hamilton Dhlamini and Kim Engelbrecht in the crime-mystery drama, Reyka.

At a glance, Thando Thabethe will magnetize television viewers with her doe-eyed face and trim figure. But the Soweto born actress/deejay is University of Johannesburg BCom graduate in accounting. Putting her theoretical business training to use, Thando Thabethe launched her underwear line which trades as Thabooty’s.  Unlike many celebrity owned businesses that only run on the proprietor’s fame, Thabooty’s, which began solely as an online enterprise in 2017, has weathered the coronavirus business closures which saw many businesses going under.  In 2021, Thabooty’s opened a physical store. Clearly a sharp-minded businesswoman, Thabethe’s brand Thabooty’s is now the official swimwear partner for Miss South Africa. It is no great wonder that Forbes Africa named Thabethe on their coveted 30 under 30 list.

Having suffered personal loss – first her father to suicide when she was only 13 and her brother, shot dead during a robbery in 2015 – one would expect Thando Thabethe to be hardened by grief. The opposite is in fact true.

In the week leading up to her birthday, Thando Thabethe illustrated her love for humanity by lending her support to female sexual and reproductive health awareness. Speaking openly on Facebook after her gynae appointment, Thabethe said cervical cancer is the leading killer of women in South Africa amongst all types of cancer. She encouraged all women to get a cautionary check up.

Through her annual celebrity netball challenge, held every women’s day, Thando Thabethe not only gives her brand further visibility but places the spotlight on the war against violence on women and children.  To every teenaged girl, “fitting in” with their peers is as important as getting an education. Thando Thabethe, who has lived most of her life without her father, has surprised matriculants who would otherwise have missed their biggest day in school with free Matric Dance outfits.

How old is Thando Thabethe

Any mention of Thando Thabethe immediately conjures images of body goals, sexy eyes and steamy lingerie. This year, celebrating her birthday, Thando showed the world her innocent version: a photo of the sweet, chubby-cheeked one year old Thando Thabethe melted many hearts on social media. 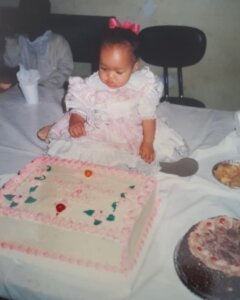 Born just four months after former President Nelson Mandela was released from Prison in 1990, Thando Thabethe turned 32 on the 18th of June. We at Quick Read Magazine wish the multi-talented Thando many more years to come.