Omuhle Gela plays Khumbuzile in the Mzansi Magic telenovela, The Queen. According to an article by Daily Sun, fingers point to Nsovo Mashaba, who is in a stable relationship with social media influencer, Mbali Sebapu.

When the actress was called for comment by Sun Team, she confirmed she was pregnant, she said: “I’m pregnant, so what?” When the SunTeam mentioned Nsovo’s name, the actress said it made her sick, according to reports. 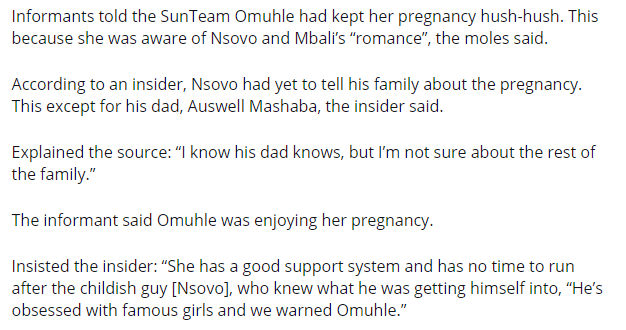 Omuhle Gela is best known for her her Muvhango character Busi Motsamai. She was replaced with Bontle Sithole. She also had a successful career as an actress to date having starred on e.tv’s Umlilo as Andile Simelane along side Gcina Mkhize, Hamilton Dlamini, Nokuthula Ledwaba and Nomzamo Mbatha.

She also portrayed the character of MyGirl on the Mzansi Magic telenovela Zabalaza. She has appeared on Imposter, Broken Vows, Ring of Lies and Generations.