ALSO READ: New series to stream on Showmax in South Africa this August

M-Net’s miniseries is a co-production with HBO-owned US network Cinemax (Warrior, Banshee), and Germany’s public broadcaster ZDF. It’s also the first series ever to dislodge M-Net’s untouchable Sunday Night Movie slot – that’s how excited they are about it.

With his congregation getting smaller every Sunday and his family growing increasingly distant, Pastor Tienie Benade begins to question his faith, his purpose, and even who he is. How can he save anyone when he himself is lost, and can he find his way back to what matters most?

This is the third-biggest SA film and the biggest Afrikaans film at the local box-office so far this year, after Kandasamys: The Wedding and Matwetwe. And it’s really no surprise. This simple, uplifting story is beautifully told and powerfully delivered.

Directed by award-winning writer/director/producer Sallas de Jager (who wrote and directed Free State and Jonathan: Die Movie), and scored by Dawie de Jager (of Klopjag fame), this gentle, funny drama will help restore your faith, regardless of your religion.

In an effort to rescue her declining ratings, a paraplegic talk show host interviews a self-proclaimed healer, who claims he can make her walk again… on live TV.

Axis Mundi is an acting masterclass from two of South Africa’s best actors – SAFTA winner Antoinette Louw from Die Laaste Tango and An Act of Defiance, and two-time SAFTA winner Deon Lotz from Skoonheid and When We Were Black. It’s co-written and co-directed by Matthew Jankes, who directed the Vimeo Staff Pick and Short of the Week Umkhungo, and Sean Steinberg, one of the writers on the record-breaking Showmax Original The Girl From St Agnes.

Zog is the keenest but clumsiest pupil in his class at Dragon School, where he longs to win a gold star as he learns how to fly, roar and breathe fire. He keeps meeting a kindly young girl who patches up his bumps and bruises, but can she help him with his trickiest school assignment yet: capturing a princess?

Round up the whole family for this one! This funny, endearing and empowering tale about a clumsy little dragon is brilliantly told, with an International Emmy nomination to prove it. The 27-minute animated short captures the magic of the Julia Donaldson/Axel Scheffler bestselling picture book with an all-star voice cast including the likes of Kit Harrington, Sir Lenny Henry and Tracey Ullman.

In 2007, the death of 20-year-old tik addict Abie Pakkies created a stir in South Africa and the world. The most disturbing part of the case was that the murderer was his mother, Ellen. Based on this heart-rending true story, Ellen explores how this loving mother became desperate enough to take her own son’s life, and why a judge let her off with a three-year suspended sentence and 280 hours of community service.

This weekend, Jarrid Geduld (aka Twist In Boy Called Twist and Randall in Dwaalster) won Best Supporting Actor at The Africa Movie Academy Awards for his performance as Abie, having already won at the SAFTAs and Silwerskerm. Similarly, Jill Levenberg (aka Mymoena Samsodien in Suidooster) won both the SAFTA and Silwerskermfees prizes for Best Actress for her performance as Ellen, and was nominated at The Africa Movie Academy Awards.

Ellen was the third-highest-grossing local film of 2018 (at a much higher per-screen rate than either Frank & Fearless or Stroomop).

SOMEONE TO BLAME | DOCUMENTARY 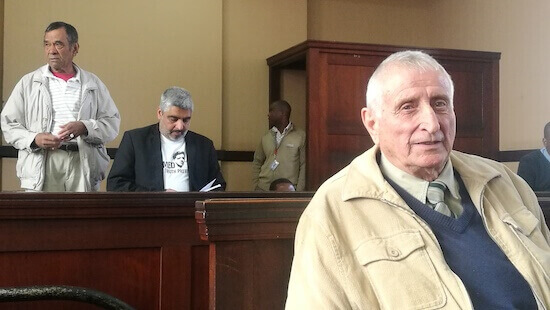 Someone to Blame – The Ahmed Timol Inquest documents the landmark 2017 case that saw anti-apartheid activist Ahmed Timol’s untimely death ruled a murder – not suicide, as apartheid police alleged in 1972. The documentary follows the court proceedings, focussing on key witness testimony to paint a vivid, personal picture of the injustices of our past, and bring us into the courtroom for a ruling that established a crucial precedent for cases of human rights violations under apartheid to be reopened.

Former apartheid policeman Joao Rodrigues will finally go on trial for Timol’s murder this coming December as a direct result of the inquest. Someone to Blame follows on from director Enver Samuel’s SAFTA-winning 2015 documentary about Timol, Indians Can’t Fly.