Flying has become one of the most common ways of transportation in the 21st century. It’s often the quickest way to travel to far destinations and opens up a world of experiences and business opportunities for travellers. However, just a few decades ago, the experience was vastly different to the way air travel is today. We chatted to KLM Royal Dutch Airlines, the world’s oldest airline still flying under its original name, about what travelling was really like in the 1950s.

From the 1950s, air travel became slightly more accessible to the broader public. It certainly wasn’t an everyday affair, mainly because tickets were still too expensive. The industry grew, however, and KLM and other airlines capitalised on these changes.

Like other airlines flying at the time, KLM introduced a second travel class in 1952. Tourist Class had more seats in the cabin and the service was less elaborate for these passengers. Tickets were cheaper, enabling more people to travel by plane. This led to the phenomenon of people booking flights to holiday destinations further from home. This proved to be a major leap forward in those days of post-war reconstruction. Subsequently, in 1958, ticket prices dropped even further when Economy Class was introduced, allowing even more people to travel by plane.

On long-haul flights, entertainment systems on board allow travellers to indulge in a variety of entertainment options – including the latest blockbuster films and popular television series. However, entertainment on board has changed significantly since the 1950s. In the early days of air travel, passengers passed time the old-fashioned way – reading books, newspapers and magazines, or chatting with the crew and their fellow passengers. Back then, there was hardly any contact between the plane and the outside world, which is gradually changing as internet access becomes more commonplace on board. In short, flying in the old days was almost nothing like it is today. 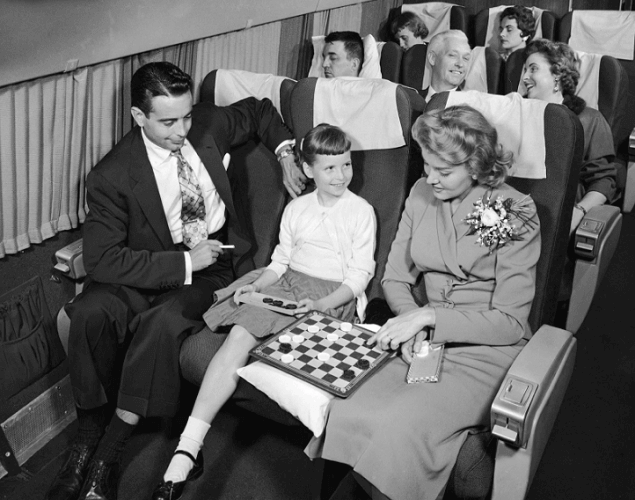 As air travel became more common in the 1950s, airlines around the world introduced various offerings in the hopes of setting themselves apart in the hopes of building connections with passengers. This is still common practice today. One way KLM set themselves apart from other airlines is presenting First Class passengers with a keepsake – a practice still popular with passengers on the airline today. Every Business Class passenger gets to take a Delftware miniature house home with them after their trip. In the 1950s, however, it was prohibited to give passengers souvenirs of any kind. KLM presented these miniatures as a “last drink on the house”, much like restaurants offer a round of liqueur. Instead of serving these drinks in a glass, they were served in a miniature bottle that passengers were welcome to take home with them. Various forms were tried until the first Delftware miniature house was introduced in 1952. This year, KLM is set to introduce the 102nd house in the collection – one for every year the airline has been in operation.

Summing up, the 1950s were a transitional age for aviation, from an exclusive time when air travel was reserved for the elite, to the current day where flying is accessible to many. With the introduction of new travel classes, distant trips became more affordable, but air travel certainly wasn’t in reach of the broader public yet. To ensure passenger loyalty, airlines sought ways to give people a lasting memory of their flight. People traveling Economy Class in those days were already far removed from the nostalgic elegance of the early years of aviation. But the 1950s did open the aircraft door to a larger group of people, allowing them to experience the magic of air travel.