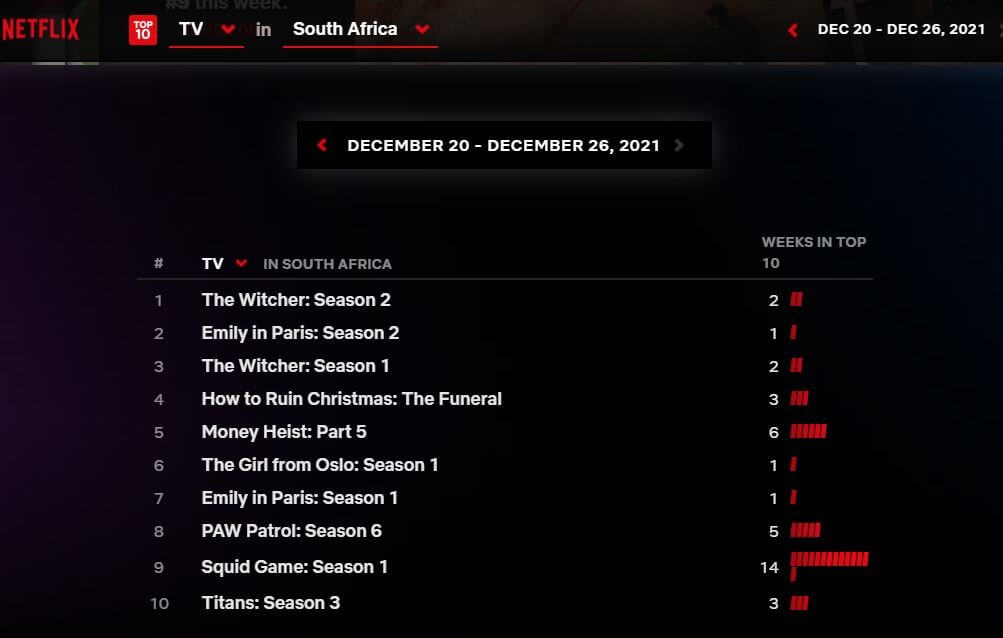 Check out the Top 10 most popular TV shows on Netflix South Africa list below, along with a brief synopsis of what the series is all about. Top titles in South Africa from December20 – December 26, 2021 are also popular in other countries around the world.

Leading the Top 10 Netflix Series list this week is The Witcher Season 2 on Netflix South Africa. The witcher Geralt, a mutated monster hunter, struggles to find his place in a world in which people often prove more wicked than beasts.

The first season consisted of eight episodes and was released on Netflix in its entirety on December 20, 2019. It was based on The Last Wish and Sword of Destiny, which are collections of short stories that precede the main Witcher saga.

4. How to Ruin Christmas: The Funeral

Free-spirited Tumi always manages to make a mess of things. Can she make it through this holiday family reunion without ruining it completely? Number 2 on the Top 10 Netflix Series is How to Ruin Christmas: The Funeral.

The gang has been shut in the Bank of Spain for over 100 hours. They have managed to rescue Lisbon, but their darkest moment is upon them after losing one of their own. The Professor has been captured by Sierra and, for the first time, doesn’t have an escape plan. Just when it seems like nothing else could go wrong, an enemy comes on the scene that is much more powerful than any they’ve faced: the army. The end of the greatest heist in history is approaching, and what began as a robbery will turn into a war. Part 5 of the iconic series will be released in two volumes, on September 3 and December 3 2021. Money Heist is still in the Top 10 Netflix Series in South Africa and has been here for weeks now.

When her daughter is abducted, a Norwegian diplomat travels to the Middle East, banking on old friends — and a deep secret — to help free her.

Hundreds of cash-strapped contestants accept an invitation to compete in children’s games for a tempting prize, but the stakes are deadly. Squid Game still forms part of the Top 10 Netflix Series list in South Africa.

Titans season 3 concludes with ‘Purple Rain’ and brings an end to Scarecrow’s reign over Gotham City.

You can also visit https://top10.netflix.com/south-africa/tv for Top 10 Netflix Series in South Africa.