From Thursday 23rd June, Freddie Flintoff, Chris Harris and Paddy McGuinness are back for their sixth series at the wheel of Top Gear, all three now with their racing licenses. Series highlights see the trio head to America on a motorsport mission to the home of grassroots racing: Florida, a TV cop car tribute as well as some suggestions for some new Cop Cars that drama producers might like to consider, and the presenters going head-to-head in a heavy- duty challenge as they train to become HGV drivers. Plus reviews with the Maserati MC20, Rivian R1T and more.

In the past few years, the presenters have tried their hands at quite a few motorsports. And let’s face it, they’ve not done very well. But with all three now boasting their racing licences, the producers decided it was time to send them on a motorsport mission to the home of grassroots racing: Florida.

Team Top Gear will be up against the talented locals in events including donk-car drag racing, a swamp buggy shoot-out, all ending up at the Freedom Factory Raceway for a NASCAR-style showdown… in old American police cars.

Their ‘team bus’ for the trip? An old RV that, to be honest, has seen better days.

Episode 2 – Bobsleighing in the Sinclair C5… with Flintoff driving. Obviously. 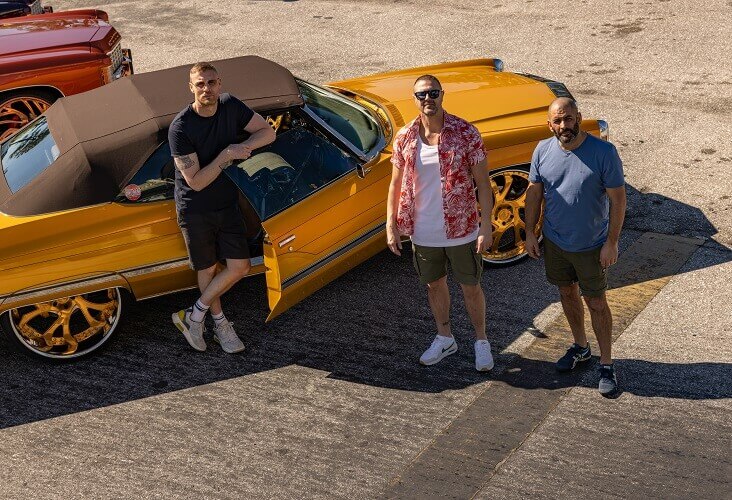 Last year, Britain lost one of its greatest inventors. Sir Clive Sinclair was a true pioneer, and Chris and Fred are out to celebrate his genius by breathing new life into one of his most iconic creations. Though much derided, the Sinclair C5 was an all-electric, eco-friendly, low-speed personal mobility vehicle, launched 40 years ahead of its time. On a mission to give this trundling trailblazer one more eccentric adventure, Fred will attempt to break the national speed limit whilst piloting the C5 down an Olympic bobsleigh run.

TV Cop Cars: Back in the day, cars in TV cop cars were as famous as the stars who drove them. Just think of Starsky and Hutch’s Ford Gran Torino, Magnum PI’s Ferrari and Inspector Morse’s Jaguar. After a drive down memory lane in some old TV cop car favourites, the presenters decide to ‘inspire’ the drama producers of today by each picking a brand-new, high performance hero car for a proper screen test, to prove just what today’s TV cop shows are missing.

Britain is running short on lorry drivers. So Chris, Freddie and Paddy have decided to do their bit by studying hard, getting their licences, and becoming fully fledged HGV drivers themselves. But once they’ve passed the test, here’s the question: who’s the best big-rigger of the bunch? Time to hit the road, live the trucker lifestyle, and tackle a few heavy-duty challenges – plus a healthy dose of high- octane racing – to decide.

Since the pandemic started, Britain’s second-hand car prices have been soaring, up by nearly a third in the last year alone. But don’t worry, because the boys reckon that, on even the tightest of budgets, you can still bag a dependable used car that’ll keep soldiering on, no matter what you throw at it. Nice theory, but with only a few hundred quid each to spend, it can’t be long before the cracks begin to appear…

The world is changing, and petrol’s days are numbered. So what does that mean for the traditional petrolhead? Chris and Paddy are on a mission to show that going green, doesn’t have to be dull. In fact – as they discover while testing some of the most ground-breaking new cars out there at the Top Gear test track – whether it’s batteries, hydrogen, or the brave new world of synthetic petrol, the future of fuel is looking very bright indeed.