Shotpan is currently one of the most searched keywords on the internet in South Africa. Some search for ‘shotpan meaning’. This comes after Prince Kaybee called the South African rapper Cassper Nyovest a ‘Shotpan’.

The Twitter fight between Prince Kaybee and Cassper Nyovest comes after Kaybee said he was not inspired by Cassper’s work out. This started when Cassper’s fan said Kaybee was inspired by Nyovest to work hard on his body, making fun of his arms.

Kaybee responded by asking: “So you think my arms were inspired by someone who doesn’t have them? (sic).”

If only you could stop editing your pictures to make your waist smaller. You have Bad bitch tendecies. https://t.co/gZstE3l31k

The tweet made it to Cassper’s wrong side and he slammed Prince Kaybee’s ‘bad b*tch’ tendencies. “If only you could stop editing your pictures to make your waist smaller. You have Bad b*tch tendecies (sic),” – Nyovest responded to Prince Kaybee’s tweet.

Both artists have been working out and sharing photos and videos of their workout sessions on social media to inspire their fans.

“To think i wanted to tweet homie yesterday about how amazing his catalog had become and how i love Gugulethu. Then i wake up to tweets like that? Lol… Batho ba rata go sogela batho. That dude is such a bad b*tch (sic),” – Nyovest said Prince’s shade was unfortunate because it came just before he wanted compliment his music.

But Prince Kaybee seemed like he didn’t care and called Cassper ‘Shotpan’. He also urged his fans to tag him when Cassper responds. Kaybee is currently in England working on new music with Mafikizolo.

Tag me when Shotpan reacts to the “Ok Shotpan” reply, I’m in studio in England with Mafikizolo but I’ll leave my phone on LOUD😊

“Tag me when Shotpan reacts to the “Ok Shotpan” reply, I’m in studio in England with Mafikizolo but I’ll leave my phone on LOUD (sic),” – Prince tweeted.

This is the end of this one for me. A fan turned a hater for no reason. You make good music man. Concentrate on that, and stop being a bad bitch!!!! pic.twitter.com/KMDY2tTf2w

Prince Kaybee vs Cassper for the Shotpan Arms Championship.

The name ‘Shotpan’ is already on Cassper Nyovest’ Wikipedia profile. It didn’t take long for contributors to make it Cassper’s nickname. His biography has changed and reads as follows “Refiloe Maele Phoolo (born 16 December 1990), commonly known as Shotpan, is a South African rapper, songwriter and record producer who does not have arms because he is short, very short…”

See the below Cassper Nyovest biography: 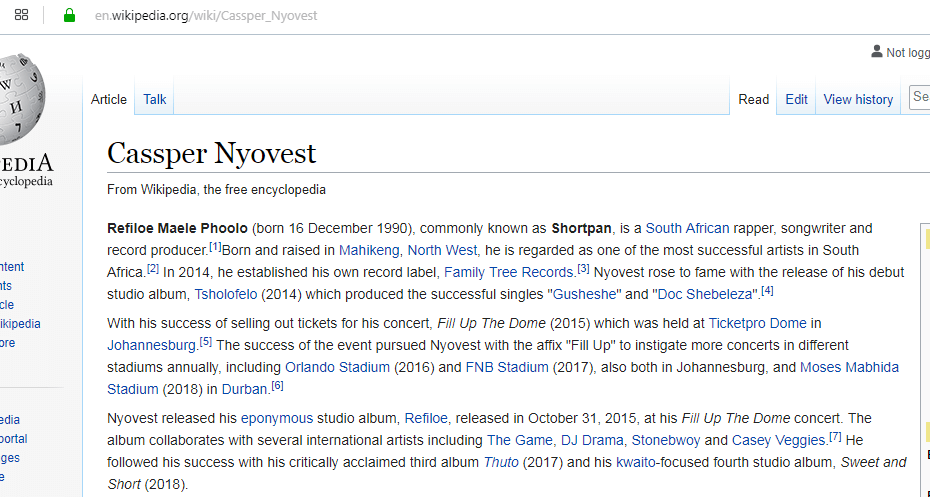