Okay, now I’m really angry; first it was that short haired girl from Sidwadweni Village who not only won Miss South Africa but also went on to be voted the most beautiful woman in the universe. Zozibini Tunzi even beat all the Martians and Plutonians on Mars and Pluto, because when you are Miss Universe, it means you the most beautiful woman not only on planet earth but also on Mercury, Venus, Mars, Ceres, Jupiter, Saturn, Uranus, Neptune, Pluto, Charon, everywhere. That girl’s victory really made me angry. I wrote about it at great length. Now they chose Shudufhadzo Musida, a woman with even shorter hair and biiiiig National Geographic hips. What the hell man!

I am old enough to have seen the transition from apartheid. I saw the yelping German Shepherd dogs that snapped at the ankles of angry black youths who were fed up with an oppressive system. I heard the desperate voice of apartheid telling Hector Pieterson to accept the language of racism, “this is an illegal gathering, disperse now!”

I heard the bullets of hate whizzing through the air after Tata Madiba was released from prison. On 11 February 1990, as the enemies of peace tried hard to make uTata’s rainbow nation dream a multicoloured nightmare.

I can understand why it took so long for Makhaya Ntini to become the first black-black South African cricket player or why it took us 25 years to find the first black Springboks captain in Siya Kolisi. The thing is, rugby is a predominantly white sport so it’s no great surprise that we waited for a quarter century after apartheid to see the first black national team captain.

But it took them 26 years to finally acknowledge beauty in women with short hair and wide hips? Wow!

The first thing that every visitor to a South Africa remarks on is the curvaceousness of our sisters and daughters. It is sometimes an offensive SA stereotype, but broadness of hips is the defining feature of Mzansi women. It is there in the history books of the early white men. They even stole Sarah Baartman and took her to foreign lands where her African body was made a public spectacle.

Since inception of Miss South Africa, 77 years ago in 1943, beauty was defined by, let’s face it, white standards. This continued even after the fall of apartheid. I need you to think very long and very hard on this. There are 59 million people in South Africa, roughly 28 million of them are female. The majority of South African women — 80% — are black. But when we select the most beautiful woman from Cape to Limpopo, we judge them on European standards? Does that even make sense to you? We expect them to have long legs, long hair and boyish hips — in a country reputed for broad hipped women. Come on, don’t make me angry in 12 official languages!

As an unapologetic lover of natural black hair, as a worshipper of wide African hips, I am thrilled beyond measure that they finally acknowledged the beauty of the curvaceous woman. But I am also angry that it took a quarter of century, post apartheid. for the judges of Miss South Africa to see beauty in a woman who typifies South Africa.

For a long time, women with wide hips have been excluded from mainstream modelling/beauty pageants, even in parts of the world where a woman is likely to be born with wide hips. To put things into perspective, just imagine the judges of Miss Korea disqualifying women with narrow Asian eyes, or a beauty pageant in the Middle East being prejudiced against women with long, bumpy noses.

In fact, if you really want to get technical, wide hips – the very thing that has been ignored in previous pageants – are a marker of good genes. The further away one stores body fat from vital organs, the healthier they are. Don’t take my word for it. Read this. Of the top 10 contestants of Miss South Africa, Shudu is not only the most beautiful but she is also the healthiest.

What I find hilarious about the European perception of African hips is that they even have a name for the “condition.”

The ever reliable Merriam Webster dictionary, established in 1828, defines this “condition” thus: 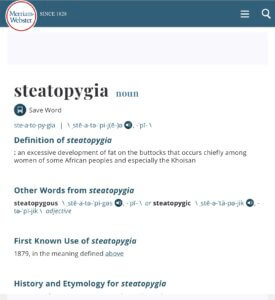 Imagine that – when a person has the healthiest store of fat, they describe it as something to be ashamed of.

I sense a counter argument, but I don’t want to hear it. Go and argue with Jan van Riebeeck!

Congratulations to Shudu, not only for being crowned Miss South Africa, but breaking down the centuries old tradition of racism. Yes, her victory shames the bigotry and self loathing that has governed our thinking. I am angry at our past of self hate, but I am happy for the future. Finally we have two examples of women in Zozi and Shudu who have showed little black girls all over the world that their hair and bodies are beautiful. Perhaps now the spirit of Sarah Baartman can rest easy.

My pen is capped

The opinions stated herein are not the views of QuickRead Magazine

Television reviewer.
A fan of natural African hair with a love for books and television. If it’s on Mzansi Magic… I’ve probably seen it.

My pen is capped