The phrase “Sbwl” is a South African slang term from the Xhosa (isiXhosa) language. Sbwl originated from the word “sabaweli” meaning desire, crave, wish for, fancy, want, to want something or yearn. Sbwl slang is usually used for things that you cannot have. Quickread.co.za has learnt that Sbwl slang was created by gay Xhosa men to conceal their desire for a woman’s man on the internet. That’s how many South Africans became curious on social media and started searching for “Sbwl meaning”

How to Use Sbwl in a sentence?

SBWL Meaning: What does ‘sbwl’ mean on social media in South Africa?

How South Africans reveal what they want with #sbwl trend on Twitter?

This Xhosa slang term Sbwl started trending on social media a few years back as South Africans opened up about the things they desire most in life. The term left many people confused and ended up asking “what does ‘sbwl’ mean on social media.”

People started sharing their desires and dreams using the hashtag #sbwl on Twitter. South African television presenter, radio DJ, actress and producer Pearl Modiadie was also mind blown by the SBWL Meaning. She was part of the group that didn’t know what the word means.

“Really? I’ve been cracking my skull trying to figure this out,” – Pearl tweeted after she searched for the meaning on Google. The radio presenter found out that #sbwl is an acronym for ‘Sabaweli’ meaning craving in Xhosa as mentioned above. 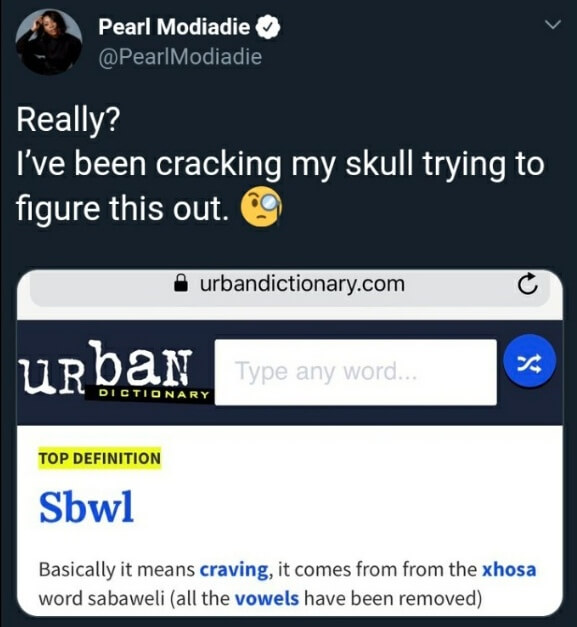 According to The Urban Dictionary the vowels of the word were just removed. The meaning of sbwl depends on the context. For example, you can see a photo of a beautiful and expensive car, as a guy, you can just respond by saying “#Sbwl the car”…that’s how some people interpret the Sbwl meaning in South Africa.