Ever since she burst onto the scene as a B-Girl prodigy, Courtnaé Paul has continued to push the limits when it comes to her career. Today, she is an established musician, choreographer, media personality and influencer who never settles for anything less than perfection. The star just dropped her brand-new single ‘Ooh Wee’, announced her stint as a mentor and choreographer on the exciting new series ‘Dance Africa Dance’ and is one of the ambassadors for the exciting launch of the Volkswagen Golf 8 GTi.

ALSO READ: The Race is On to Drive the New Golf 8 GTI

Now, Courtnaé Paul opens up about her exciting career so far:

You just dropped a brand-new single ‘Ooh Wee’ with Da L.E.S, Money Badoo and Phantom Steeze. Talk to us a little bit about the inspiration behind the track.

The motive behind the song was really just to give people a good time. I wanted to create a vibe that makes you feel like we haven’t been in lockdown for as long as we have. As the country begins to open up, I wanted to bring the party vibe along with it too.

What was it like working with these acts in the studio?

With Phantom Steeze and Money Badoo being new wave artists, and L.E.S being an OG in the game, this collaboration brought something exciting and unexpected to the scene. Pairing artists that are different but which complement each other it’s always tricky, but this one flowed and felt very natural. It has all the makings of a fire track and I am so excited that people are loving it.

You’ve recently released beautiful visuals for your single ‘No Other Way’ with Rowlene and Manu Worldstar. Tell us more about that.

I wanted the video to look like the song sounded and I was inspired to create a video from exactly how the music made me feel. I’ve got a deep love for Afro and Kizomba and the song plays in that spectrum as well. All this coupled with an amazing director like The Lotus Sutra made sure that everything we envisioned came to life and it’s a project I’m very proud of.

Obviously, you made a name for yourself as a B-Girl. How do you push yourself to being the best?

I push myself to being the best I can be. In this case, my best just so happens that my best is actually thee best. Haha! I’ve never been one to half-do anything, so if something has my interest you’ll really see it in the execution. This been a monster dance year for me so far. I won the Red Bull BC One B-Girl S.A. final and I will be off to Poland in November for the world final. I’ve also just recently won Breaking for Gold which will give me my SA colours and set my sites on the 2024 Olympics, with the first stop being in Paris this December.

You’re also a mentor and choreographer on Dance Africa Dance. What inspired you to be a part of that series?

I love being involved at the beginning of something – especially when it encompasses a fusion of culture, music and dance, everything I am incredibly passionate about. This is a show that started in India, travelled to Singapore and now has its first season in Africa. The show will be played in all 52 African countries, the UK and the Indian islands which is really exciting. I back anything that gives our talent a platform to shine which is why I was really excited to sign on to this series.

Collaboration is obviously incredibly important in progressing as both an entertainer and an influencer – a space you have also tapped into recently. What, in your opinion, is a great influencer?

I’m not sure what makes a great influencer but I find it works best when you’re authentic about the projects you work on. Social media has somewhat made all of us influencers, even if you never intended to be one. It’s allowed me to connect with my dream brands and create all-encompassing campaigns. I’m currently working on a campaign with VW called #GTI8OnTour as part of the JHB team alongside Donovan Goliath and Khutso Thaledi. This campaign sees us as an integral part of the launch, pushing out the information, testing the cars, encouraging fans of the car to download the app, play the game and win themselves tickets to the launch events around the country and even taking it offline where I’ll be DJ’ing at the launch fest in Jozi on 16 October. 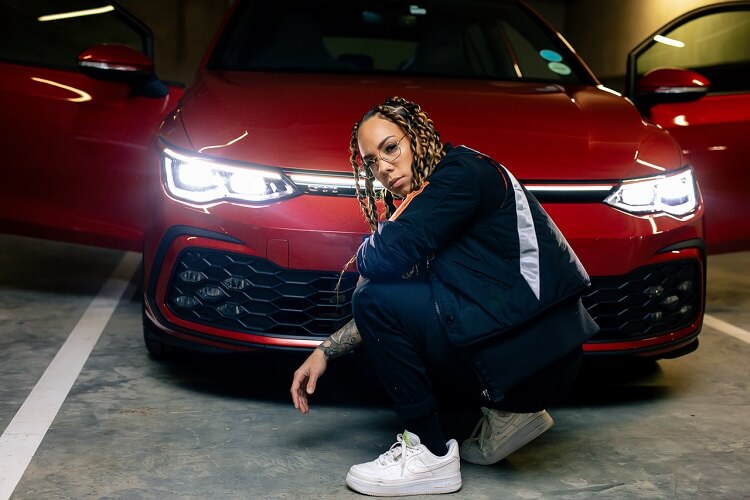 What else do you have up your sleeve over the next few months?

Over the next few months I’ll be traveling to complete internationally, while releasing more music, dropping new music videos and collaborations with brands like G-Star RAW and Volkswagen. You can see me flying around in the Golf 8 GTi, DJ’ing at venues around the country, or on your screens every weekend for Dance Africa Dance on ZeeWorld. Join me for the ride!

For more information on #GTI8OnTour and how to win tickets to the car-meets in Cape Town at the CTICC Parkade on 2 October, Durban at the Cornubia Mall Parkade on 9 October and in Johannesburg at the Fourways Mall Parkade on 16 October, download the app here.