Woke In Progress, Showmax’s second Original scripted comedy, Mma Moeketsi, is now shooting in Johannesburg. The fish-out-of-water comedy is set at The Maboneng Marble, where two broke, tryna-be-woke twenty-somethings become unlikely roommates. Having just found out she’s adopted, 22-year-old Martie has come to Johannesburg searching for her birth parents; 25-year-old Amandla is trying to reconnect with the motherland after decades of following her political elite father between international posts.

ALSO READ: Showmax: This Heritage Day, stream these proudly SA contenders from the Emmys, Jackson Wild and the AMAAs

Woke In Progress is created by 30-year-old showrunner Rea Moeti, who has rapidly made a name for herself since graduating from her Masters at The National Film and Television School in the UK – named one of The Top 15 International Film Schools by The Hollywood Reporter last year.

Moeti’s Marikana-themed short film, Mma Moeketsi, won Best African Short Film at Cape Town, Jozi, and Zanzibar International Film Festivals, and is currently up for an Africa Movie Academy Award. She was also head writer on the first two seasons of Lockdown, winning the SAFTA for Best Drama Writer. But comedy is Moeti’s first love: she was head writer on SAFTA-winning sitcoms like Ses’Top La and Abo Mzala, as well as a director on the SAFTA-nominated Thandeka’s Diary.

In 2017, when Moeti first pitched Woke In Progress to Showmax, Vogue had just proclaimed Maboneng “the coolest neighbourhood in Johannesburg,” while last year Forbes included the cultural hub in its roundup of “The 12 Coolest Neighbourhoods Around The World.”

“Our first two scripted Originals – Tali’s Wedding Diary and The Girl From St Agnes – both broke records as the most watched shows on Showmax ever, so we know our audience is hungry for quality South African series,” says Candice Fangueiro, head of content at Multichoice’s Connected Video, which houses Showmax and DSTV Now. “We think they’re going to love laughing with Maboneng’s Afropunk crowd just as much as they did with Talibabes in Sea Point in Tali’s Wedding Diary.” 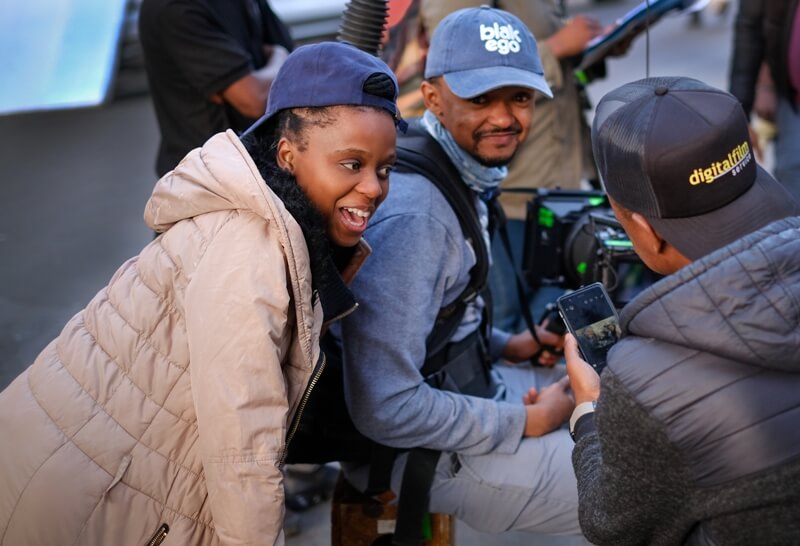 Other key cast include Kiroshan Naidoo, winner of the 2016 Fleur du Cap for Most Promising Student, as Christo, a paranoid misanthrope programmer who shares the flat with Martie and Amandla; Lebogang Tlokana (aka The Funny Chef) as the over-entrepreneurial apartment manager, Lerato; Ebenhaezer Dibakwane, the 2016 Comics Choice Newcomer and 2017 Intermediate Award winner as her brother Puma, the receptionist/artist; and SAFTA nominee Yule Masiteng (aka Jomo Zungu in Scandal!) as the homeless sage who camps outside The Maboneng Marble.

“Working on Lockdown was evidence for me that MultiChoice is offering shows that are becoming more and more daring, and that our audience is ready,” says Moeti. “When I first pitched Woke in Progress to Showmax, it was tamer than it is now, because I thought that was what South African platforms wanted. But Showmax has pushed it to go further. So it’s because of Showmax that the girls are as liberated as they are now.”

Moeti co-created Woke in Progress with Emma Lungiswa De Wet, one of the writers on the hit animation Munki and Trunk, which has two million YouTube subscribers. “In a way she’s Martie to my Amandla,” jokes Moeti.

Tali’s Wedding Diary dominated the comedy category at this year’s SAFTAs, taking home five awards, including Best Comedy and Best Actress (Julia Anastasopoulos), so Woke In Progress has a lot to live up to. You’ll be able to make up your own mind when the edgy comedy premieres on Showmax on 12 December 2019.