Set in the 1970’s, American Gangster is based on true story of Frank Lucas, New York’s brilliant and terrifying mobster and the police officer who chased him. Gritty acting and writing give depth to archetypal characters.

Frank Lucas (Denzel Washington) earns his bones as a ruthless enforcer and collector in New York. When his boss dies Lucas assumes the leadership role of his own crime syndicate made up almost entirely of his family. Ingeniously he figures out a way to bring a better drug product onto the streets for less money. This sends other criminal groups into a nosedive and puts a target on Lucas’ back. Officer Richie Roberts (Russell Crowe) tries to figure out who this new drug kingpin is; where he came from, and he sacrifices everything to bring Lucas down. Less dangerous than the criminals he is tracking are the dirty cops in league with the criminals.

Frank Lucas comes to bloody life in American Gangster when Denzel Washington slips into the persona of the vicious outlaw. His ferocious frenzies are stunning; his vehement brutal bloodshed is fascinating and frightening. Denzel’s perfectly erect posture, calm visceral acts of rage, and controlled frenzied made me fall head over heals in love with bad Denzel. Even his tender moments with his wife, Eva (Lymari Nadal), are captivating.

The supporting cast of American Gangster has their own moments of illuminating brilliance. Ruby Dee, who plays Mama Lucas, steals the focus from any actor unlucky enough to share the scene with her. She brings a sage radiance and wise femininity to each of her scenes. Josh Brolin brings a deep smarmification and infuriating corruption to Dirty Detective Trupo. Cuba Gooding Jr. is out of control, flamboyant and tragic. Lymari Nadal’s portrayal of the wilfully blind wife and surprisingly fragile woman is endearing and frustrating. 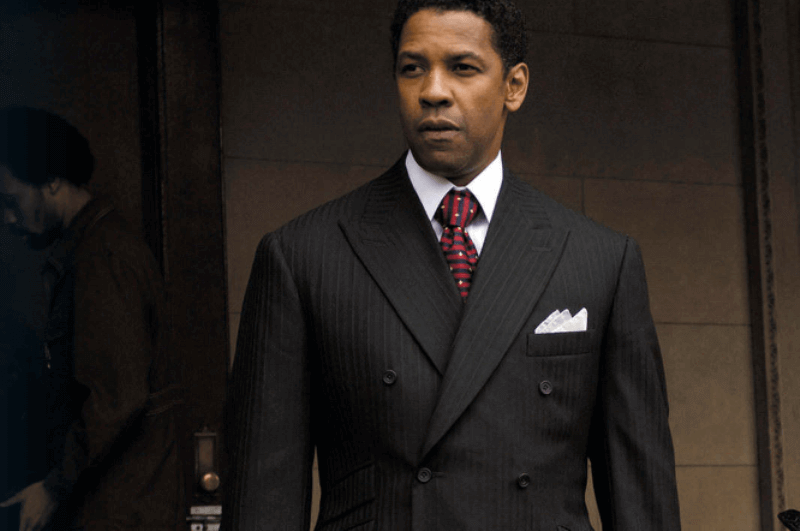 The one exception to the exceptional acting phenomenon that is American Gangster is Russell Crowe. Crowe was like a three legged dog trying to run an agility race with intact champions. The script calls for countless scenes where Officer Roberts puts himself in situations where he is supposed to be noticeably uncomfortable. Crowe’s unnatural portrayal of discomfort truly screws the pooch. He couldn’t even get the more mundane characteristics of his character down. He was as close to abysmal as humanly possible. It is a low down, sub basement, dirty shame that Crowe rubbed his thespian excrement all over American Gangster’s richly written script.

Steven Zaillian’s view of the notorious Frank Lucas is scary, fearsome and mesmerizing. There are no original characters in American Gangster. We’ve seen most of the characters in different stories, they just had different names. The fascinating thing about Zailian’s script is the way he crafts the situations to bring out the entire spectrum of each character’s flaws and strengths. Frank Lucas is more clever business than violence but his attacks are ruthless and unforgettable. Officer Roberts’ personality isn’t that different than Lucas. He is shamelessly honest but isn’t afraid to break his knuckles to get what he wants – justice. Both men are willing to sacrifice everything for business.

American Gangster is an all around interesting and captivating movie going experience. The bad apples don’t spoil the barrel for this bio-drama.

The Queen Teasers October 2020 provided by TVSA. The Queen Mzansi is on Mzansi Magic channel 161 on Mondays to Fridays at 21h00. The below…