Better known for her role as Hlengiwe Twala, a fierce and cutthroat NFH journalist, Nqobile was awarded the prestigious NVIFF award on the 26th of September 2019 in a glamorous event held in Amsterdam, where she was nominated amongst other African actresses.

Talking about her work and the award, Nqobile Khumalo says: “I have the great fortune to do what I love, and serve while telling stories. I could not have imagined the world would applaud and embrace my craft. My heart is full.”

The New Vision International Film Festival Awards’ mandate is to present the most outstanding film productions in every part of the world. Films and projects are selected on the basis of quality and originality in a broad selection of films from Africa, Asia, Europe and America. 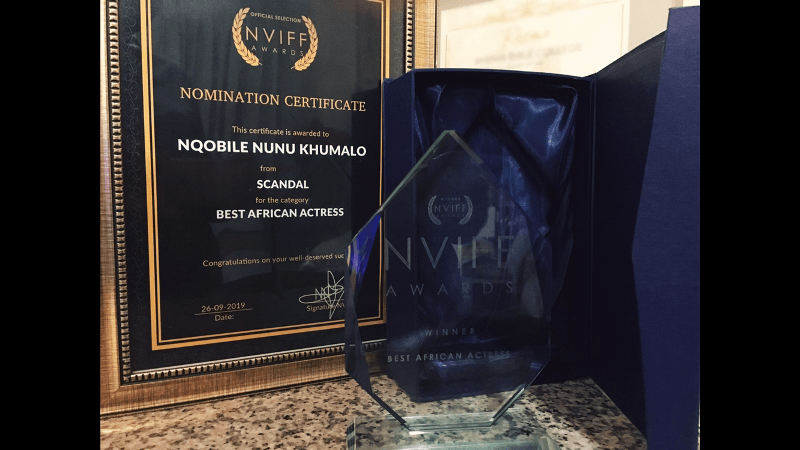 In the storyline, which saw Nqobile receiving the Best African Actress accolade, Hlengiwe feels compelled to financially take care of her mother, her notorious sister, as well as her sister’s two children. This takes a strain on her finances and she ends up taking loans she can’t afford. The financial burdens leave her distress and this affects her personal and work life.

“This came as a huge surprise to us. We congratulate Nunu for making us proud, especial on a story that’s relevant to most black families,” says Grace Mahlaba, Scandal!’s Creative Producer.

“The story that we thought resonated with only South Africans, turned out to resonate with the rest of the world. We’re so delighted to have touched people beyond South Africa,” she adds.