Telkom Deals range from personal products to package deals. Telkom deals and specials in South Africa are released every single month. Customers can get Telkom mobile deals on data, Wi-Fi, contracts, iPhone and many more. In this article, we discuss the Telkom deals to help you save on your monthly bills.

ALSO READ: Vodacom Deals: How to Get Latest Vodacom Catalogues and Specials

What Are Telkom Deals?

Telkom deals are Telkom’s sales opportunities which generate business for the network service provider. The Telkom deals are available every month are valid for a specific duration of time. If you are looking for Telkom specials and promotions, you’ve come to the right place. Telkom gives customers exclusive deals on contract so that customers can get the device they need, that’s more affordable than ever. As mentioned above, there are Telkom Deals Data, Telkom Deals WiFi, Telkom Deals Contract and many more.

How Do I Get the Latest Telkom Deals, Specials and Promotions?

In order to get these affordable deals from Telkom, customers can visit the nearest Telkom Shop or their official website at https://secure.telkom.co.za/today/. All Telkom deals are available nationwide at all Telkom Shops.

To check which products are on special, you can also download the latest Telkom catalogue online by visiting http://deals.telkom.co.za/Broadsheet.pdf. 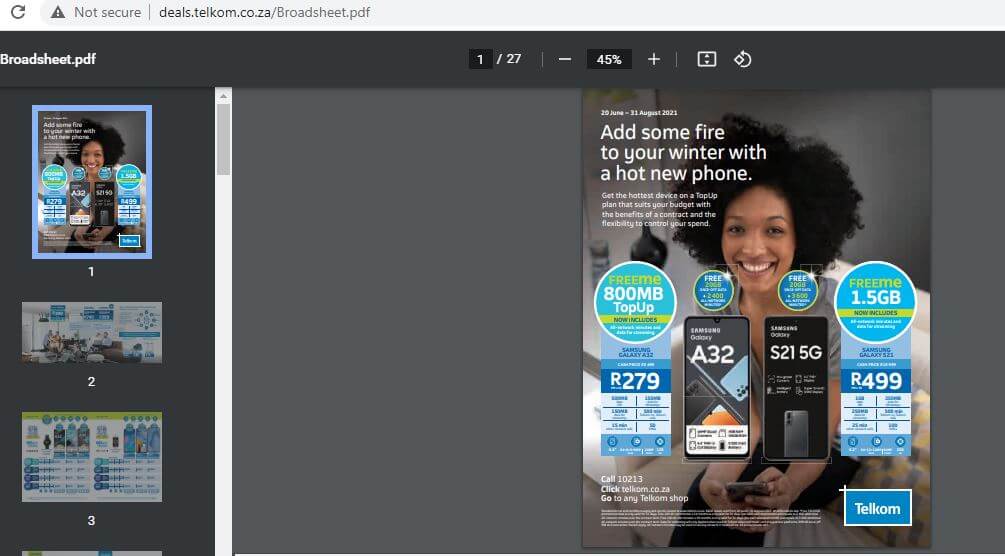 Once you click on a Telkom deal, you’ll be presented with its detail, which displays all the product name, prices, promotion end-date and actions in regards to the deal.

Telkom is one of South Africa’s largest telecommunications giants and dominates a large percentage of the market. Telkom South Africa offers a variety of solutions for home or business when it comes to extensive services as well as great products.

Telkom has been the foundation of South African communications for more than 140 years, and it has built a unsurpassed footprint of copper, Fibre and wireless technologies in the country.

Telkom’s managed data solutions are used by most of the large, corporate and global companies in Southern Africa. Telkom offers broadband internet and voice services to most of the fixed residential and small/medium business customers in the country.